Dublin is feted as the city of the word, peaking on Bloomsday, 16 June, in celebration of Ulysses’ centenary. Yet its concert and opera scene is broadening in brilliance. Had I known before yesterday that the vivacious Peter Whelan and his Irish Baroque Orchestra were performing Bach’s B minor Mass in Christ Church Cathedral, I might not have chosen to hear what until recently was called the RTÉ National Symphony Orchestra of Ireland – and wouldn’t have known what I’d missed.

As it happened I got almost the best of both worlds, admitted to the late afternoon rehearsal of the Bach, further wondering at the collective and individual excellences of the 10-strong, Belfast-born Sestina choir and leaving regretfully at the end of the Credo to walk to the lavishly restored National Concert Hall. The NSO, as it’s now called, has that dazzling animateur Jaime Martín as its chief conductor – already a good omen – but just as I hadn’t heard this fine orchestra live before, I also hadn’t made the acquaintance of the evening’s maestra, Anja Bihlmaier. With posts at the Hague’s Residentie Orchestra and the Lahti Symphony Orchestra, the German hasn’t come from nowhere, but the results were more spectacular than anticipated.

Even if they’d been merely good, I’d be forever grateful for knowing that Galina Ustvolskaya’s Sports Suite is a perfectly naughty curtain-raiser. Austere in her person and in the uncompromising musical style she regarded as truly her own, Ustvolskaya also wrote public Soviet works to pay the bills, later withdrawing most of them from circulation. This sort-of-10-movement divertissement (there are repetitions) starts like the “light” music of her mentor and would-be husband Shostakovich on steroids, all shrilling piccolo and rattling xylophone, and wraps several lurid but unashamedly populist dances around fragments that are as outrageously discordant and even menacing as the extremes of the older composer’s Fourth Symphony (still, in 1959, under wraps since being withdrawn from circulation at the end of 1936 before its first official performance). The NSO brass had a blatant ball with all this; so far, we saw Bihlmaier exercising exuberant but disciplined mastery. 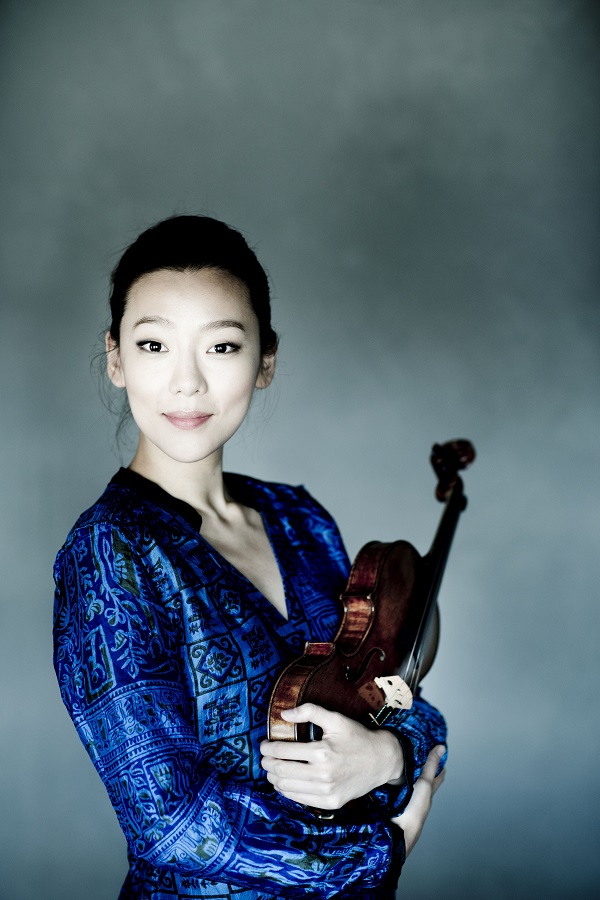 From the noisy to the super-refined: German-Korean violinist Clara-Jumi Kang (pictured left) gave a highly cultured performance of Mendelssohn’s Violin Concerto, beautifully partnered by Bihlmaier and the NSO wind especially. The handsome Victorian hall, newly upholstered, is a big space to fill, and it was probably more to do with the acoustics that the solo violin sound sometimes seemed to go upwards rather than outwards, But on this evidence I’d love to hear Kang in chamber music, and there was all the draw-them-in magic possible in her most soulful of encores, the Andante from Bach’s Second Violin Sonata  – a clever choice, since its theme echoes the Andante of the concerto; Kang was too purposeful to allow either of them to be tainted by association with a certain well-known West End musical number.

Mendelssohn, who conducted the first performance of Schumann’s Second Symphony in 1856, would surely have applauded Bihlmaier’s stunningly well-prepared, detailed and profoundly musical interpretation. Just how fine it was I can attest with favourable comparison to two great performances: Haitink’s with the Chamber Orchestra of Europe and John Eliot Gardiner’s with the London Symphony Orchestra. Unlike both, Bihlmaier went for the large-scale symphonic approach with a full complement of strings, all the more impressive when she flicked the switch to soft phrases or chords. Schumann’s style is such an elusive one to get right, but when it works, this comes across as one of the greatest symphonies ever.

Bihlmaier grasped the shape not just of each movement but of the whole, in which the almost manic exuberance of the first movement, past its flowing, chorale-like introduction, and the euphoric scherzo give way to the controlled melancholy of the Adagio espressivo and a finale which can’t quite shuck that off until the mid-point. Where Clara as the anchor to Schumann’s life creeps shyly out in his version of the lovely melody in Beethoven’s An die ferne Geliebte (To the Distant Beloved). The first thought was, what a magnificent work, rather than, what a remarkable performance.

Which it was, and though sparse in the big space – do the Irish get frightened off by an unfamiliar name on the programme? –  the audience roared its approval. Proceedings were warmed by the fluent opening presentation of RTÉ lyric fm’s Paul Herriott, avoiding all the usual pitfalls (like I wrote up topm they’re good with words, the Irish, and the programme notes were good, too). Not a bad first evening at all in a city where I’ll be spending much more time from now on.